It can be quite a thrill – you’re going about your business when suddenly – Whoa!

Look! Do you see that?

You get a rare glimpse of the wildlife that calls Olympic National Park home.

It may happen just about anywhere, any time. But if you visit the following 10 places (OK, 11 – we hate limiting your options), you increase your odds of having your own wildlife encounter right here on the Olympic Peninsula – and possibly even right outside your window at Domaine Madeleine.

You may never travel such a short distance for the opportunity to see a herd of Roosevelt Elk. Named for President Teddy, this massive, majestic breed is the largest in North America and indigenous to the Olympic Peninsula. 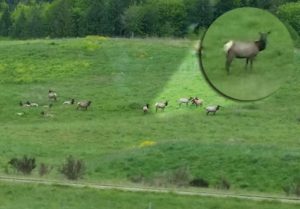 From Domaine Madeleine, take Hwy 101 East towards Sequim for 11 miles. Between Palo Alto Rd. and Sequim Bay Lodge, yellow lights on caution signs will flash when the herd is in the area. Sightings are infrequent, but it’s worth keeping an eye out.

A drive to the Hoh Rainforest Visitor Center (the “official” entrance to the forest) is one of the longer day trips some of our guests take. However we don’t recommend going to the Hoh Rainforest for the sole purpose of spotting elk. But if you are already planning to visit to walk the “Hall of Mosses,” keep in mind, a sighting is possible. 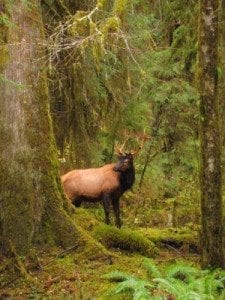 If you’re planning to visit Victoria B.C., the Coho Ferry is the transportation of choice for most of our guests. Leaving from Port Angeles, the Coho travels about 90 minutes one way. During that time travelers may take a nap, enjoy one of Domaine Madeleine’s boxed breakfasts, or buy tickets for several attractions in Victoria. But you might want to brave the sometimes blustery winds and head out onto the deck. With a bit of patience and luck you may catch sight of a gray whale spouting. 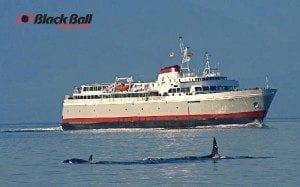 Occasionally more than one whale will make an appearance. Humpbacks and orcas have also been spotted, as well as seals, sea lions and Pacific white-sided dolphins.

A visit to the Olympic Peninsula might not feel complete without a visit to Cape Flattery – known as the northwest-most point of the contiguous United States. About a 2 hour drive from Domaine Madeleine, there are enough things to see and do in and around Neah Bay – part of the Makah Reservation – to make for an unforgettable day. (See our day trip map) A moderate hike on a partially wood plank-paved trail takes you to an observation deck overlooking the Pacific Ocean. The stunning view may be made even more amazing if a gray whale happens to be in the area, as in this photo from when the Red Chair came to visit us. 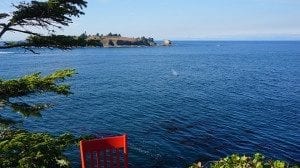 Sea lions may also be in residence, as well as hundreds of species of birds. In fact, every April, Neah Bay celebrates the arrival of golden and bald eagles starting to nest with the Eagle Festival – a must-do for die hard birders.

Just minutes from the Inn, this preserve, with its iconic Dungeness Spit (the longest natural sand spit in the United States) and lighthouse (visible from our property, shown below), contains diverse habitats that support hundreds of animal and plant species.

Of note are a variety of birds:

Shorebirds, including the black oystercatcher

Seabirds, such as the Caspian tern

Birds of Prey, like the bald eagle and the snowy owl.

The Salmon Cascades overlook is off of Hwy 101, about 5 miles down Sol Duc Road before the Sol Duc Hot Springs Resort. From late October through early November, determined coho salmon migrate from the salty ocean to leap over waterfalls on their way to spawn upstream in the fresh water of the Sol Duc River. You’ll feel like cheering if you get the chance to see these determined swimmers fly out of the water and up to the next level on their seemingly impossible journey. 60 second clip follows with salmon jumping at 7, 30 and 47 seconds in…

Aside from being the crowning jewel of this UNESCO World Heritage Site, the road to, and trails around the Hurricane Ridge Visitor Center offer one of your best opportunities to view wildlife. From Domaine Madeleine, this entrance to Olympic National Park is just 15 minutes away. From there enjoy a leisurely 30 minute winding ride with panoramic views up to the visitor center. Several hiking trails of varying levels of difficulty begin in this area, and wildlife sightings of some sort are almost guaranteed. 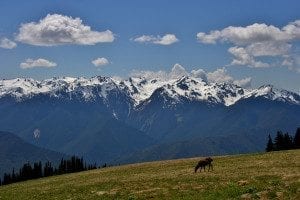 Take Hwy 101 west to SR 112. After about 5 miles, turn right onto Camp Hayden Road and drive about 3 miles to end at Salt Creek County Park and Campground. In addition to rocky tidal pools, this 196 acre County Park features, sandy beaches, a playground and hiking trails. You can also wander around bunkers that were once part of Fort Hayden during World War II. But for wildlife viewing this park, which is adjacent to the Tongue Point Marine Life Sanctuary, is a lesser-known treasure trove of inter-tidal inhabitants. 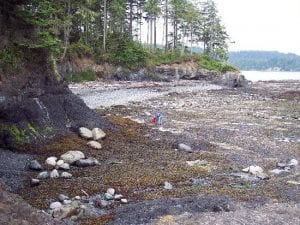 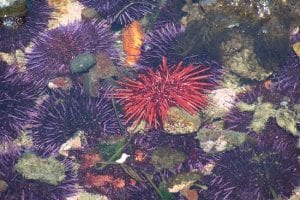 Guests staying with us might not even need to leave the property to see wildlife. Black-tailed deer of all ages frequent the 5 acres that make up the front of the property. They may even venture across the driveway, tempted by the numerous crops growing on the farm. 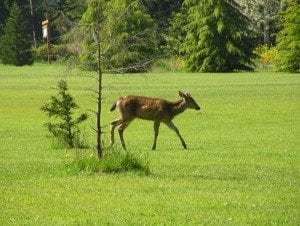 Bald eagles also have a regular lookout atop a tall spruce tree at the corner of the inn’s back 5 acres. Sitting stone-still for up to ten minutes at a time, these specimens are perfect subjects for nature photos. 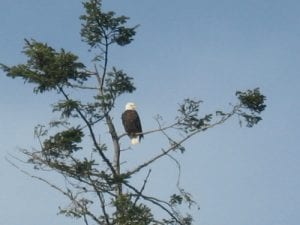 Meanwhile at ground level you may spot frogs or the aptly-named banana slugs. If you’re not too squeamish, this second largest species of slug can be fascinating both for their size (some as long as 8 to 10 inches) and their golden yellow color – although color variations spots are not uncommon. 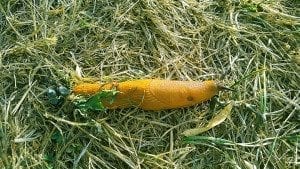 Whales are pretty much the Holy Grail of wildlife viewing. Since whales are typically visible for only seconds as they surface to spout, being in the right place at the right time is critical. And that’s just what whale watching excursions are all about. The expert crews that run these excursions have such a high success rate that they guarantee sightings. That’s because they go where the whales are and have on-board naturalists that know how whales behave.

Whale watchers may see as many as 5 different whale species, and sightings of multiple whales in one area is not uncommon. This is also probably the closest you’ll ever be (or want to be) to these fascinating creatures. A variety of tours run from early March through late November and depart from both Port Angeles and Port Townsend.

The Olympic Game Farm is a short 15 minute drive from Domaine Madeleine. It is open every day of the year except Thanksgiving and Christmas. This is primarily a drive-through attraction that takes you into 84 acres of terrain and gives you a face to face interaction from your vehicle with tons of different animals. 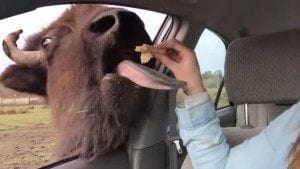 Purchase a $2 loaf or two of whole wheat bread (the ONLY food visitors are allowed feed the animals) and you will have Bison eating out of your hand. Most of these animals roam free and will approach your car’s open windows. The “waving bears” reside a bit further back behind a large fenced section. 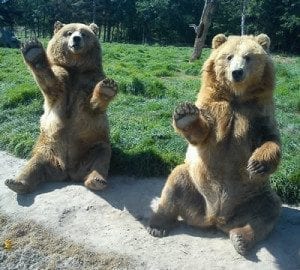 Several animals that require special care, like the Siberian tiger, have their own enclosed habitats. You will not drive a shorter distance to get closer to and see more wildlife more days of the year than at the Olympic Game Farm.

Here is a roster of species in residence: